Both the four and six pack come with two red and two blue identification collets (rings). Rubber grommets are included.

The KLE Innovations (Keith-Louis Eichmann) Copper Harmony Phono / RCA plug has been redesigned from the original Bullet Plug to overcome metallurgical shortcomings in the original design. The Harmony Plug is a new revolutionary approach to Keith-Louis Eichmann’s (aka KL) previous Bullet Plug design, which itself was a revolutionary approach to the phono plug / RCA connector.

KL believes he has, with this new phono / RCA blueprint, solved a series of problems that collectively degrade audio / video performance and that do so in an additive manner. The importance of this innovation and redesign cannot be overstated. Its ramifications extend to every RCA interface in which high quality signal transfer is an issue. Extensive listening and critical comparisons played a major role in the evolution of the design, confirming at every juncture the audibility of properly applied science in even the area of Phono/RCA connection. In summary the Harmony RCA plug is a further innovation and totally new approach to RCA connection.

The following are the improvements that have made to the Copper Harmony Phono RCA plug design when compared to his previous Bullet Plug design: 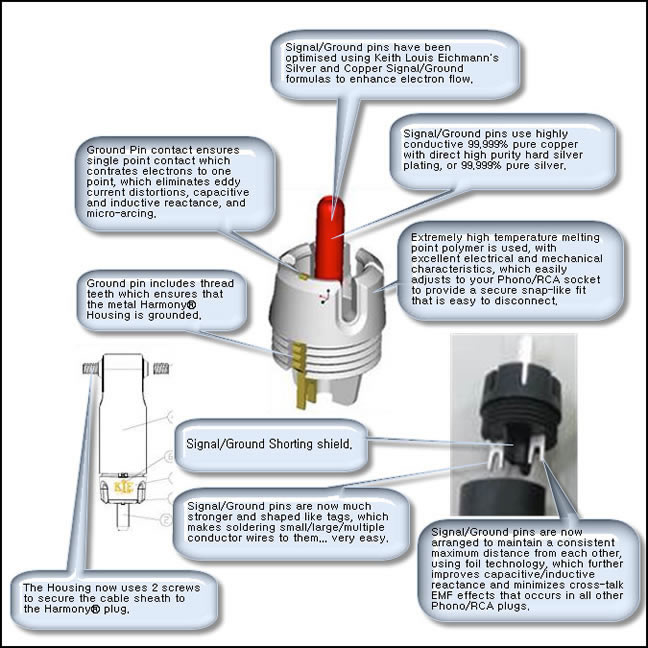 KL's testing and reports received, indicate the KLEI Copper Harmony when compared to the Eichmann Copper / Silver Bullet RCA plugs, has noticeably better PRAT, Decay, Timbre and Texture, Edge Control and Extension, Resolution, and Stage. The following quotes are from the many reports that KL has received…