Our Price:
$2,995.00 per pair without cabinets
Price includes 10% GST.
Tax deducted at checkout for overseas shipments. 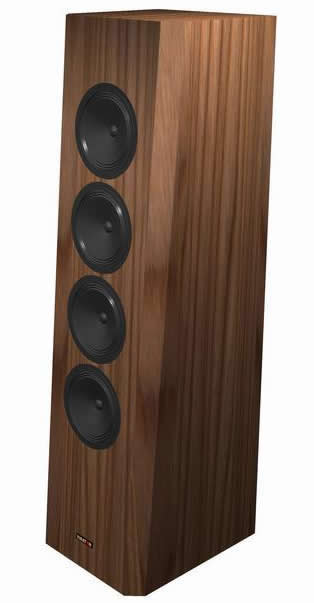 Characteristics and Sound Properties
When the QUADRO was developed, the primary objective was to produce a loudspeaker with a very high sensitivity rating because the trend in recent times has been a retrograde one towards high-end tube amplifiers. However, these are often restricted to very low outputs of only a few watts. There are plenty of loudspeaker constructions which promise extremely high volume levels with only one watt but, on closer examination, are seen to produce that level only at medium and high frequencies. Extending the high sensitivity level to include low frequencies is indeed a challenge. To achieve that aim, it is crucial to include a very large diaphragm area which, in turn, requires a large sized cabinet if one wants decent bass volumes.

The generously sized enclosed QUADRO cabinet provides sufficient space for four of the excellent B 200 - 6 OHM full-range loudspeakers to ensure that, even at the lower end of the bass frequency range, there is plenty of cone excursion. The drivers are closely bunched one above the other, which provides for an excellent radiation pattern: a broad angle in the horizontal plane and a relatively tightly bundled beam to top and bottom. To prevent the bundling effect becoming too strong in the vertical, all the drivers are powered in parallel in the bass frequencies and, as the frequency increases, the B 200 - 6 OHM 's are phased out one after another so that, at very high frequencies, only the second driver from the bottom is working. The slightly tilted front baffle means that this full-range loudspeaker is then aimed directly at ear height, assuming one is seated at least 3 metres from the speakers.

Anyone with experience of the sound properties produced by the SOLO or SOLITUDE speakers will have a fairly clear idea of the clarity of sound produced by the QUADRO. These qualities are, however, boosted by the fact that the air in the room is set in motion by a large diaphragm area but that force is hardly aimed at the floor or ceiling at all. A noticeable feature of the QUADRO are its clarity and analytical qualities, while, at the same time, not becoming obtrusive. The QUADRO may not be able to match the extremely deep bass output levels of the SOLITUDE, for example, but that is in fact a positive feature in rooms that are not so large because the reverberating room resonance frequencies are not stimulated at all. However, the physically tangible kick-bass effect, a feature expected from musicians' speakers, can indeed be produced if the amplifier is powerful enough. In addition, the QUADRO shows its strengths in the faithful reproduction of voices and recordings of large orchestras. It is fair to say, then that this is a good, all-round high-end loudspeaker.

Extract from Klang & Ton 2/2006: The idea for this loudspeaker came from the excellent B 200 full-range loudspeaker which features high sensitivity thanks to its filigree paper diaphragm and lightweight driver system (...) In each of the QUADRO speakers there are no less than four of these full-range loudspeakers, of which three are responsible for the low and medium bass and the lower mid-range, while the fourth is unfiltered. (...) Somewhat to our surprise, these VISATON speakers left nothing to be desired in the lower regions and were quite happy without a subwoofer thanks to their eight 20 cm drivers and 350 litres of cabinet. The snare drums punched holes in the air with a vehemence approaching that of a horn system. Without a shadow of doubt, this manufacturer from Haan, Germany, is at home in this field. (...), in tumultuous orchestral bursts the QUADRO was firmly in control. (...) VISATON's QUADRO cuts an impressive figure both acoustically and visually, it loves dynamic input and will forever remind its owner how pleased he can be that he did not buy his speakers from a department store.

Extract from Image HiFi 4/2008: The powerful sound produced by these speakers appears to float away from the loudspeakers and hover behind the main speaker plane, creating a kind of sound backdrop. But none of this is for nothing, in particular the superior, earthy sound of the Quadro which, by the by and a point of not inconsiderable importance, is also capable of achieving notable volume levels. Despite a relatively low power consumption these speakers will generate volumes which will put a smile on the face of any rock and pop fans and which would have caused other loudspeakers, in particular simple full-range speakers, to throw in the imaginary towel, while the Quadro continues to maintain its precision and clarity even at really high volumes. At the same time, this large-format speaker works in a highly intensive, appealing manner, the sound comes across as absolutely tangible and is delivered incredibly precisely by the eight drivers – this is a real experience! If everything is set up correctly, these Visaton speakers will not hold back as regards their totally effortless performance, achieving considerable leaps in volume without the slightest problem, fascinating the listener and generating a feeling of utter relaxation. The bottom line is that this is a successful combination of full-range loudspeakers with sensitivity which only requires one more factor to function perfectly: lots of space. 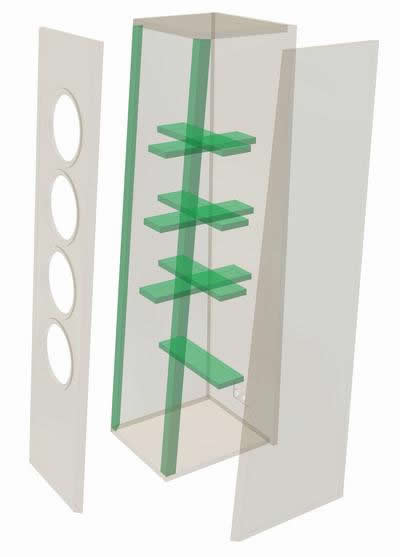 Assembly
The cabinet is not difficult to build. It is made up of a single large-scale chamber whose walls are strengthened by three reinforcing cross members and one single strengthening strut at the bottom. The most difficult part is the angled front baffle with its broad bevels on both sides. Triangular reinforcing pieces have to be glued in place from inside. It is also important to ensure that the lid and the base are exactly shaped to match the front baffle (not a right-angle).

Once the speaker cabinet is finished, it makes sense to do the "battery test": Connect a 1.5 volt battery to the terminals (plus to plus, minus to minus). Watch the diaphragms and if all four move forward together, you have connected up the drivers correctly in sync.