Our Price:
$665.00 each without cabinets
Price includes 10% GST.
Tax deducted at checkout for overseas shipments. 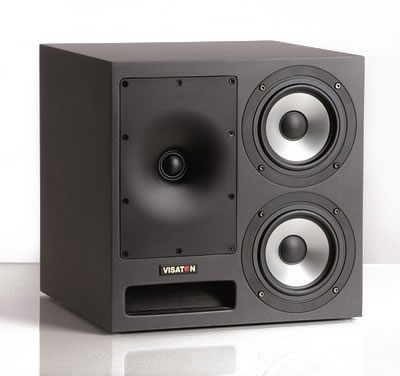 Characteristics and Sound Properties
The naming of the Studio 1 was very easy due to the optics, which are reminiscent of typical studio monitors. This does not mean that the Studio 1 is solely a studio monitor. This speaker can also be used in larger home theater systems and, of course, as a pure stereo system, supported by a powered subwoofer if necessary.

By using the Waveguide WG 220x150, coupled with the excellent properties of the well known G 25 FFL - 8 Ohm tweeter, and the two AL 130 - 8 Ohm woofers, an interesting and extraordinary construction speaker kit came into being, which can be described as extremely rich in detail and lifelike in terms of precise focus and soundstage.

During the development of the STUDIO 1, some tricks had to be employed to achieve the above mentioned properties. The bassreflex port is installed at an angle of 45° upwards, which eliminates the well known problem of standing waves in the channel itself.

Additionally, the Waveguide WG 220x150 adds substantial improvements to the qualities of the G 25 FFL - 8 Ohm: On the one hand, the height of the waveguide brings the sound generation zone of the tweeter and the woofers into line, as on the other hand the exponentially expanding shape of the waveguide optimizes the radiation pattern and puts less strain on the tweeter in the lower frequency range. An optimized radiation pattern in this context means that the width of the acoustical beam of the tweeter is adapted to the beamwidth of the woofers in the region of the transition. Thereby, a homogeneous sound also arises in rooms with unequal reverberation times.

These important points allow for the excellent sound of the Studio 1, which can be described in summary by the word "directly". 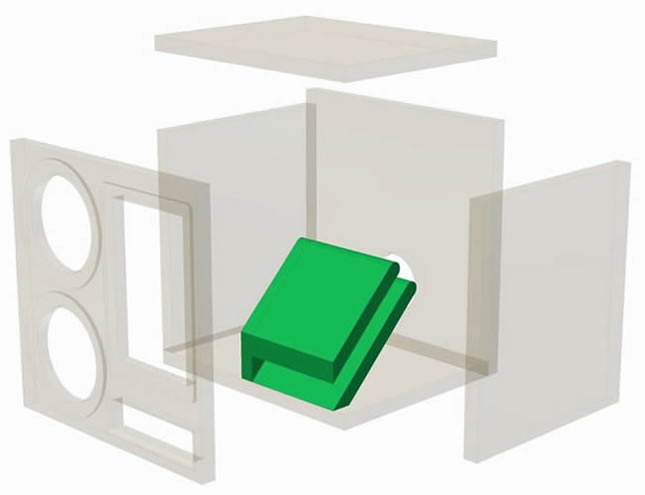 Assembly
In order to keep the construction of STUDIO 1 as simple as possible, it is advisable to start with the front panel, where slot for the bass reflex port has already been cut out (accuracy and true sided positioning of the opening is extremely important because of the mirror-image arrangement of a pair of Studio 1). Then both side panels and top and bottom can be glued onto the front panel (the rear panel should not be mounted in this step).

While the glue is curing, one can proceed with the bass reflex port. After the three panels of the channel have been cut out according to the drawing, they can be glued / screwed together, starting with the internal side panel (also pay attention to true sided assembly). Now, the curvatures at the edge of the port should be countersunk, because this is no longer possible after the port has been fixed inside the housing. To do so, a router with an appropriate round cutter head suits best.

To ensure optimal fitting of the channel, it can now be tentatively held in the respective area in the housing and glued there after perfect alignment. Through the still open rear panel, the corners / edges of the housing and the bass reflex port can be sealed with glue. By means of a rasp, the outer edges of the front panel can be slightly rounded off. The next step should be the pre-drilling of the mounting screws for the crossover on the rear panel (do not drill through the panel) behind the position of the waveguide and shortly above the terminal. This makes the mounting of the crossover inside the cabinet easier later on.

Finally, the rear panel can be attached onto the housing and one can start milling out the holes for the speakers and the waveguide, and with the jigsaw one can cut out the opening for the terminal according to the drawing.

Internal Damping
Arrange two mats of damping material loosely throughout the cabinet. Ensure that the opening of the bass reflex tube stays clear of the damping material.