Our Price:
$2,595.00 per pair without cabinets
Price includes 10% GST.
Tax deducted at checkout for overseas shipments. 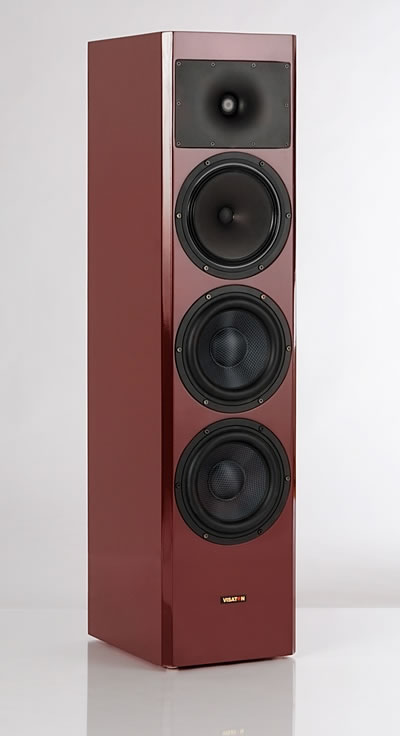 Characteristics and Sound Properties
The basic concept, as simple as it was ambitious, that lay behind the creation of the La Belle speaker was to define a perfect speaker system with no measurable or audible weak points in any test discipline and that would, as a result, ensure maximum listening pleasure in any room and with any music. To achieve this aim, a number of factors had to be taken into consideration, the most important of which were linear frequency response along the axes and across a certain angle coupled with minimum distortion, even for higher dynamic peaks.

A crucial factor in this respect is the choice of the right drivers. To obtain supreme large-signal behaviour in the bass it is necessary to provide an expansive diaphragm area in connection with long cone strokes. In this respect, there was no real alternative but to opt for the extremely long-excursion TIW 200 XS - 8 Ohm driver. Mounted as a pair, these two woofers on each side even out-do the TIW 300 - 8 Ohm, and have the added advantage that they require less space and thus enable the speaker columns to be built as a remarkably slim unit with the bass drivers in the front panel.

Thanks to the absolutely inexhaustible volume reserves inherent in these woofers and the specially adapted crossover, it was possible to dispense with a bass reflex arrangement to limit cone excursion. La Belle's base is, as a result, even more precise and clear and, depending on the room, go even further down the bass frequency scale than you would expect of conventional bass reflex speakers. To cater to dynamic mid-range frequencies with adequate diaphragm area there could be no better choice than the B 200 - 6 Ohm. Originally designed as a full-range driver, the B 200 - 8 Ohm boasts minimum mechanical losses and a light-footed, responsive mid-range. Protected against overly long cone excursions in the bass range and supported at the upper end of the frequency range by the tried-and-tested KE 25 SC - 8 Ohm ceramic dome driver, the B 200 - 6 Ohm in this combination excels itself and leaves nothing to be desired.

The tweeter, in cooperation with the Waveguide WG 220x150, displays qualities undreamed-of. Thanks to its optimised directivity, the ceramic dome driver in the Waveguide can ideally by linked to the large mid-range driver, which ensures an absolutely homogeneous, seamless unit. Even at the crossover between the mid-range driver to the woofers, there is no gap in the beaming effect, which is why the frequency response for the entire speaker unit is wonderfully linear not only along the axes but also at various angles. In addition, the separating frequencies have been selected in such a way that each branch covers a similar band of frequencies, which minimises annoying intermodulation distortion.

A listening test will confirm that this concept is an unqualified success - in creating La Belle, we have made a loudspeaker that has not the slightest weak point and reproduces any musical material with such authenticity and accuracy that one soon gives up trying to detect a flaw and just enjoys the music at a quality level as yet unknown.

The peculiarities of the individual room are far less significant than with most other loudspeakers. Thanks to its steady directivity, La Belle sounds equally as good in heavily damped rooms as in poorly damped, modern living environments. The good, solid deep bass is not excessive in smaller rooms thanks to the enclosed compartments but, on the other hand, is not inhibited by large rooms and high volume levels and is happy to descend into the deepest of low-frequency regions. Finest-quality high and medium frequencies combine to create a virtual stage which is presented to the listener as firm as if cut in stone and well differentiated, irrespective of the pitch. La Belle's special fascination is in the extremely broad dynamic range covered. Even at very low volume levels, it projects instruments and voices realistically and tangibly into the listening room and yet retains such a degree of lightness and fidelity, even at very loud volumes beyond the threshold of pain, that listening to is not wearing.

La Belle is, then, definitely the recommendation for demanding listeners who wish to rediscover their entire music collection and do not want to have limits imposed on them by the loudspeakers.

Assembly
The boards are cut out as given in the parts list and prepared as in the drawings, then stuck together as butt joints. It is easiest to start with a side-wall to which the rear panel, floor, top and all the internal separators are then glued. At this stage, it makes sense to drill small holes for the cables from the crossovers to the loudspeaker drivers. Pass the required length of cable through these holes and then seal them off again using hot-melt glue, making sure they are airtight. Then attach the second side wall and finally the front baffle.

Now the individual compartments are damped and the drivers prepared for their first trial fit. The KE 25 SC - 8 Ohm tweeter is first screwed to the Waveguide, the screws for the purpose are included in the Waveguide packaging. To prevent blur we recommend sealing the mating surface with sealing tape or removable glue. The unit thus created, KE 25 SC - 8 Ohm + WG 220x150, can now also be fitted to the baffle.