The Viseeo MOSTO MO-ST1-A is designed to interface directly with your Audi vehicle with the MMI 2G (MMI Basic, MMI Basic Plus or MMI High) head unit installed. The MOSTO integrates seamlessly with the factory fitted display and equipment already installed in your car to create a telephone system identical to the expensive OEM equipment offered by Audi but at a fraction of the price. As well as full telephone features, the ViseeO MOSTO offers music playback from any A2DP enabled device such as the iPhone or other phones with A2DP capabilities. In order to us the music streaming the CD changer in the car must be disconnected as the A2DP uses the same input for music playback. The user can therefore choose between CD changer (if installed) and A2DP.

The MOSTO will fully integrate with the dashboard and steering wheel controls in the same way that the factory fitted Audi Bluetooth kit would. You can answer, dial out, reject calls and adjust call volume all from the phone buttons on your steering wheel, dash board and centre console. The MOSTO will automatically connect with your phone every time you re-enter the vehicle. It can store up to 4 different phones in its memory and supports both automatic and manual (OPP) phonebook upload. 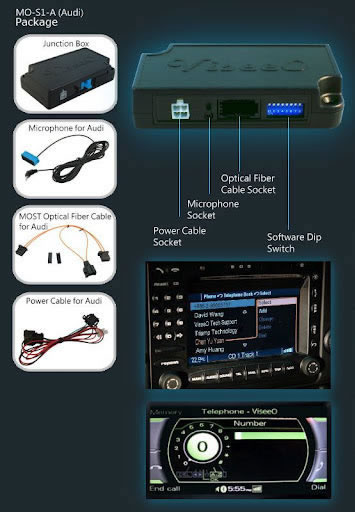 The ViseeO MOSTO (MO-S1-A) is designed for use in the following Audi vehicles featuring the MMI 2G entertainment system. This includes all variants - MMI Basic, MMI Basic Plus and MMI High. These head units are normally found in the following vehicles made between 2004 and 2009:

How do I identify the Audi MMI 2G model?

Audi A4, A6, Q7 and A8 - MMI Basic: The vehicle contains a red monochrome center screen. Speakers are in the front doors only. A navigation system is not present.

Audi A4, A6, Q7 and A8 - MMI Basic Plus: The vehicle contains a red monochrome center screen and a DSP amplifier. Speakers are also in the rear doors. If a CD navigation system is present it is located in the glovebox. The MMI 2G was produced until end of model year 2008.

Audi A6, Q7 and A8 - MMI High: The vehicle contains a colour center screen. If a DVD navigation system is present it is located in the boot. The MMI 2G was produced until end of model year 2008. 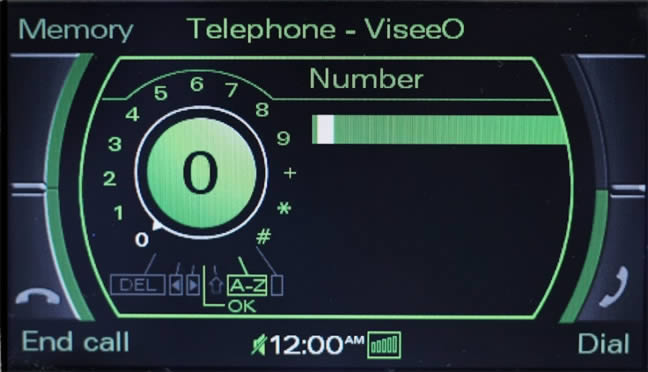 The ViseeO MOSTO is designed to integrate with the advanced MOST fibre optic technology used by the MMI 2G head units. It is discretely installed behind the dashboard with full operation of the kit carried out by the original head unit. Installation is straightforward and involves connecting the MOSTO into the fibre optic loop already present in the vehicle. The fibre optic connection cable is included and will allow plug-and-play connection with the original fibre optic cables.

The MOSTO requires only 2 wires connecting for power. The included microphone is designed to be installed in the factory location next to the interior light which allows for excellent outgoing microphone audio quality. All cables are connected to the junction box which is discretely hidden away behind the dashboard.

Some Audi vehicles may need coding in order to recognise the MOSTO unit if the car has not already been activated by Audi to recognise the factory phone module or CD changer. This only takes a couple of minutes and can be carried out either by Audi, an Audi specialist or auto electrician with the diagnostic software or by the ViseeO coding dongle.