We are open and orders are shipping as normal.

Our Price:
$19.00 each
Price includes 10% GST.
Tax deducted at checkout for overseas shipments.
In Stock

"Living in Manhattan for over 25 years makes me feel that it is "my" town, my very own, because I've never lived so long in one place before. And what a place! So full of excitement and opportunity. A place where anything can happen ... yet where anyone can feel at home, from the kid with a kazoo on Sheep's Meadow to the Pakistani cabbie humming Gershwin. A place where the likes of Willis Conover and John Hammond made me feel at home from the start.

I feel privileged to live 35 flights up (which I climb for cost-free fitness), with a bird's eye view of half the city, from Madame Tussaud's to Miss Liberty. Free to fly away, but always happy to return to our nest in the clouds, our favorite people, sunsets on the Hudson, and my favorite nooks.

There have also been, of course, less pleasant experiences, but I try to think of them only as experiences that have taught me something useful. No hard feelings at all. To celebrate this little quarter-century of mine, I've written several songs for Manhattan, as a humble Thank You to a great city."

As a youngster learning classical piano in mid-fifties Poland, when jazz was barely tolerated by the regime, Adam Makowicz discovered jazz on Willis Conover's Voice of America broadcasts. It did not take long for jazz to discover Adam Makowicz: by 1977 he could be heard on 26 albums, had performed on three continents and been voted Number One Jazz Pianist of Europe by readers of the international periodical, Jazz Forum. In that year the legendary talent scout and producer John Hammond brought Makowicz to the mecca of jazz musicians, New York City. He arranged a ten-week engagement at the famous jazz club, The Cookery, in Greenwich Village, a solo album called Adam on the CBS - Columbia label, and a solo performance at Carnegie Hall on the same bill with jazz icons Earl "Fatha" Hines, George Shearing and Teddy Wilson. Appearing in such august company, says Adam, "I was scared to death!". 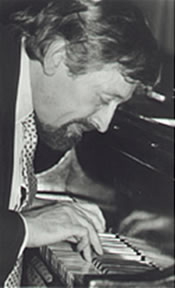 Since then he has been a major attraction at jazz festivals all over the world; was guest soloist with such orchestras as the National Symphony of Washington, the London Royal Philharmonic Orchestra, the Moscow Symphony Orchestra and the Warsaw Philharmonic; and has expanded his discography to 50 albums, with 34 of them under his own name. These include CD's individually dedicated to such beloved American composers as Irving Berlin, George Gershwin, and in recent release, Duke Ellington. Now in addition to his brilliant improvisations on the popular classics, Makowicz occasionally performs his own compositions.

On one of his recent albums, Reflections on Chopin, Makowicz brings his extraordinary technical virtuosity to bear upon his own musical roots, presenting Chopin in a jazz idiom, as he did on the 150th anniversary of Chopin's death when invited to perform at the French Embassy in Washington, DC. It is the only disc of its kind in America, and underscores his interest in building bridges between classical music and jazz.

Since 1989, Adam Makowicz has returned to his homeland every year, popularising the music of American composers both in solo recitals and with the country's finest symphony orchestras. His performances in packed halls have included Gershwin's Piano Concerto in F, as well as a Rhapsody in Blue that features his own extended cadenza. Makowicz's many honours and awards have included the Officer's Cross of Merit of the republic of Poland.